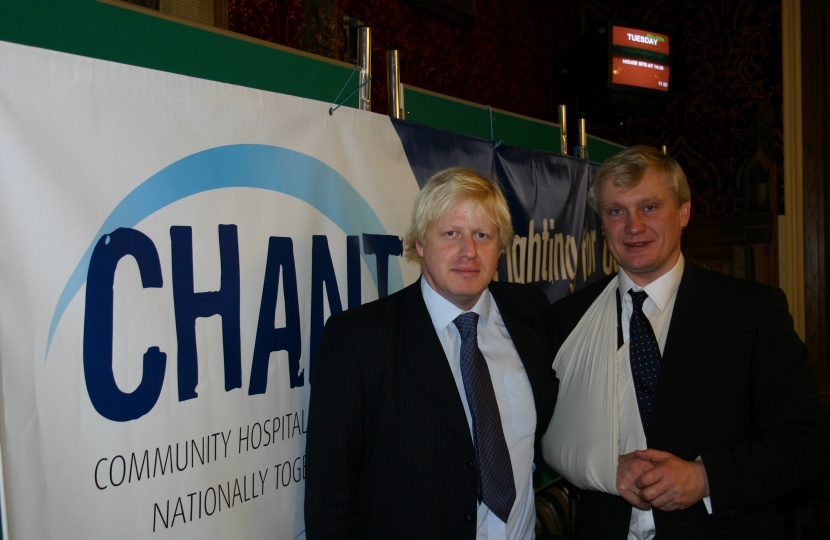 Graham’s first task on election in 2005 was to fight the Labour Government’s plans to close all NHS beds in the Beverley and Holderness constituency. The government had announced the closure of Beverley, Hornsea and Withernsea community hospitals leaving local residents, and particularly the elderly, at risk.

Graham led marches in all three towns and then founded CHANT (Community Hospitals Acting Nationally Together), a national, cross-party pressure group to campaign for community hospitals. He led repeated delegations to meet Ministers, broke the record for the number of petitions presented to Parliament in one day, organised a rally addressed by David Cameron and Boris Johnson and eventually persuaded the Government to u-turn and announce additional funding for community hospitals and services.

As a result the Primary Care Trust gained funding to build a new hospital in Beverley and maintain beds in Withernsea. Sadly, they have now gone but Graham continues to meet regularly with the local NHS bosses to preserve health services for the local community.

Hornsea Cottage Hospital League of Friends has been reassured services at the hospital will be retained with the possibility that more could be added.

I am writing to raise awareness for the Care Quality Commission’s ‘Declare Your Care’ campaign. The CQC is determined to further raise standards of NHS and social care, but it can only do this if people speak up...

In December Graham Stuart, MP for Beverley and Holderness, facilitated and Chaired an important event between the Hornsea Hospital League of Friends, Councillor Barbara Jefferson and representatives from the City Healthcare Partnership, which delivers clinics at the Hospital, East Riding of Yorks

East Riding Clinical Commissioning Group is running an important consultation on how it delivers urgent care locally.  Among other proposals the CCG plans to close the Minor Injuries Units (MIUs) at Hornsea Hospital and Withernsea Hospital, as well as to remove all the community beds from Withern

At the end of 2014 six new Community Public Access Defibrillators were installed in and around Hornsea, providing vital lifesaving equipment if somebody suffers a cardiac arrest.

In an inspection report, released today by the Care Quality Commission, Beverley’s East Riding Community Hospital has been judged as having met the required standard in the three areas where failings were identified in the summer, leading to the closure of beds on one of the wards.

Graham has met with the Care Quality Commission to find out how work to improve performance at Beverley’s East Riding Hospital is progressing and when patients can expect to see the beds re-open.

Graham has met with the Chief Executive of the Humber NHS Foundation Trust to find out what the Trust is doing to improve the problems highlighted in the Care Quality Commission’s report last month that has led to the closure of 18 beds at the hospital.

Graham Stuart, the MP for Beverley and Holderness, has toured the new East Riding Community Hospital in Beverley, which will be open to patients from the end of July.