Save Our Minor Injury Unit 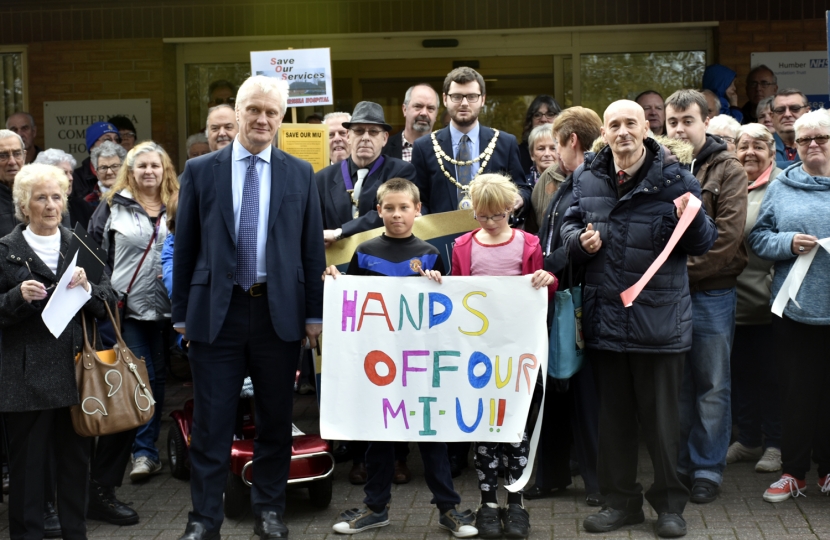 Following the announcement by East Riding Clinical Commissioning Group in March 2017 that it planned to close the Minor Injuries Units in Hornsea and Withernsea, Graham took his fight to keep local minor injury services open right to the very top.

Graham wrote to Health Secretary Jeremy Hunt to drive home the extent of local concerns over the future of healthcare in the area. These actions convinced the Health Secretary and his advisers to refer the CCG’s decision to the Independent Reconfiguration Panel (IRP), a rare concession in such cases. In late 2017, the IRP decided against advising a full review of the CCG’s decision, but Graham said he had not given up the fight.

Graham fought hard against the closure plans, and coordinated rallies in both towns.

Working closely with the Hornsea Hospital League of Friends and the Withernsea and District Health Forum, Graham also organised a petition which secured the support of many thousands of people across Beverley and Holderness.  This was presented to local health chiefs in December 2016.

There was a clear consensus among Holderness residents that the plans were a mistake that would leave them facing long round trips over country roads to get help following a cut or a sprain, and that they also risked increasing the pressure on both Yorkshire Ambulance Service and A&E at Hull Royal Infirmary. In an area with low car ownership, Graham was determined to make sure local residents were not left behind.

In April 2018 the CCG ignored the clamour from residents and closed the Minor Injuries Units in Hornsea and Withernsea. For Withernsea, Graham secured a couple of concessions – the CCG provided an 8-to-8 Centre based at the hospital where very minor injuries could be treated. To address the low car ownership in Withernsea, the CCG offers free taxi transport to and from Beverley Urgent Treatment Centre. Graham continues to fight, alongside Councillors Healing, Tucker and Holmes, for a decent NHS provision for Withernsea and surrounding area. In 2021 the CCG were forced by the MP and Councillors to replace the discredited 8 to 8 service with an improved minor injury service and every six months Graham brings together representatives from the CCG, the GP practices and other NHS organisations to meet with him and Councillors to discuss NHS provision improvements.

In Hornsea, upon the closure of the town’s MIU unit, fantastic volunteers set up a First Aid unit based in Tesco car park, and it continues to offer a great service to the town. Graham brings together representatives of Hornsea Hospital League of Friends with the NHS every six months to maintain and improve services offered at the hospital.

Graham has been a steadfast supporter of measures to protect vital roads linking the coastal town of Withernsea with communities to the South from the threat of creeping coastal erosion.

Graham Stuart, MP for Beverley and Holderness, has welcomed the good news in the first set of data coming out of the pilot of Withernsea’s new service for minor injuries.

Graham Stuart, MP for Beverley and Holderness – which includes Withernsea and the surrounding communities – has added his voice to those welcoming a long sought-after improvement to healthcare provision in Withernsea.

Conservative Parliamentary Candidate, Graham Stuart, has called for a meeting to address residents’ continuing concerns over healthcare provision in the South-East Holderness area if he is re-elected as MP for Beverley and Holderness.

Graham Stuart, Member of Parliament for Beverley and Holderness, has written to the Chief Executive of the CCG regarding the wayfinding sign for Withernsea Hospital.

CCG chief to face questions over Withernsea 8 to 8

Withernsea’s MP, Graham Stuart, will have the chance to question East Riding of Yorkshire Clinical Commissioning Group’s (CCG) Chief Officer, Jane Hawkard, after it was announced that crisis talks over the town’s under-fire 8 to 8 Centre will take place within the next week.

Local MP, Graham Stuart, has demanded an urgent meeting with the East Riding of Yorkshire Clinical Commissioning Group’s (CCG) Chief Officer, Jane Hawkard, following a number of complaints from Withernsea residents and ward councillors over the “out of control” situation at the town’s new 8 to 8

I am writing at a crucial moment for the future of health services across Holderness.

Graham Stuart MP: There is no substitute for good local hospital care in Withernsea

Following on from the East Riding of Yorkshire CCG’s decision to temporarily close the ward at Withernsea Hospital due to staff shortages and the notices of possible redundancy to ancillary workers, Graham Stuart, Member of Parliament for Beverley & Holderness said:

Graham Stuart has welcomed Health Secretary Jeremy Hunt’s decision to refer the decision to close the Minor Injuries Units (MIUs) at Hornsea and Withernsea to the Independent Reconfiguration Panel (IRP).