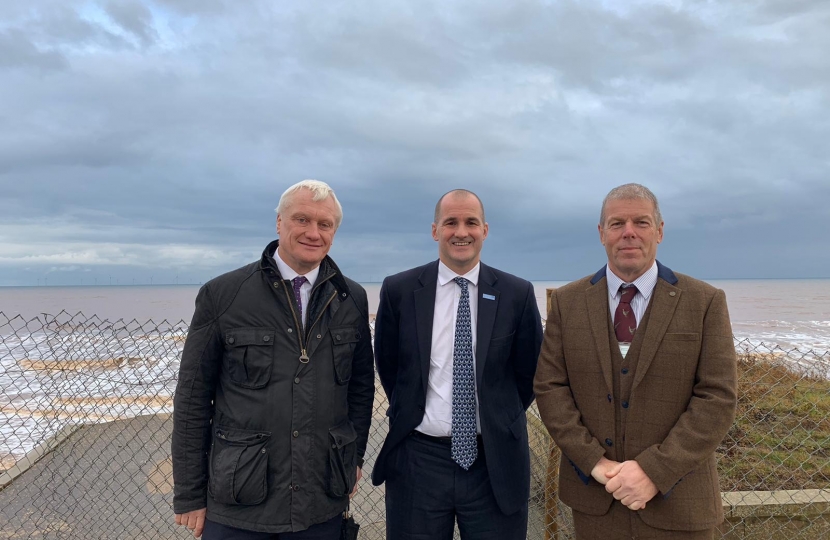 Graham has been a steadfast supporter of measures to protect vital roads linking the coastal town of Withernsea with communities to the South from creeping coastal erosion.

Holmpton Road and Hollym Road are both important for blue light services to be able to access the communities to the South as well as for residents who want to go into Withernsea to shop or use other local services. They also run on top of vital infrastructure providing electricity, water and broadband to local residents.

Not to mention the homes in the Newsham Gardens area, who would be completely cut off from neighbouring communities or even be at risk of falling victim to the sea.

Backing plans for protections from the outset, Graham supported East Riding Council’s bid for investment for a 400m extension to the existing rock armour from the Coastal Communities Fund in 2018 – making representations to the Minister responsible, Jake Berry MP. Graham invited the Minister to Withernsea to see the devastating impacts that coastal erosion has on the community.

Disappointingly, the bid for Coastal Communities funding was unsuccessful, but Graham continued to make representations to the Minister so that when ERYC bid for £3m European Regional Development Funding, Jake Berry put the scheme through to the next stage.

During the planning process, objections to the scheme were made by Natural England, who had concerns about the effect that the protections would have on sediment flow along the coast. To address this, Graham arranged a teleconference between himself, council officers and Natural England to make NE aware of just how important these protections are and how urgently they are needed.

Following the teleconference, Graham wrote to the Minister and subsequently Natural England informed Graham and the council that they would withdraw their proposed objection.

In October 2019, Graham received the news that £3 million ERDF funding had been secured following his hard work and the hard work of the local councillors and council officers.

70,000 tonnes of rock were successfully delivered and carefully placed during 2020 and the scheme is now complete.

Graham Stuart, MP for Beverley and Holderness, has welcomed the news that rock armour deliveries to protect the southern end of Withernsea are due to start arriving in May 2020.

Graham Stuart, MP for Beverley and Holderness, has welcomed the news that the East Riding of Yorkshire Council have secured just over £3 million funding from the European Regional Development Fund to go towards extending the rock armour at the southern end of Withernsea.

Graham Stuart, MP for Beverley and Holderness, has welcomed the news that the East Riding of Yorkshire Council have secured just over £3 million funding from the European Regional Development Fund to go towards extending the rock armour at the southern end of Withernsea.

Graham Stuart, MP for Beverley and Holderness, has welcomed the fantastic news that Natural England have listened and have withdrawn their objection to the planning application for the proposed South Withernsea Coastal Defence Scheme.

Graham Stuart, MP for Beverley and Holderness, this week held discussions with representatives from Natural England and East Riding Council, to press Natural England for its support for the proposed 400m extension to Withernsea’s rock armour defences.

Graham Stuart, MP for Beverley and Holderness, is delighted that Minister Jake Berry has put through to the next stage the ERYC’s £3m bid to the ERDF for increased rock armour protection for the south end of Withernsea.

After being invited by Beverley and Holderness MP Graham Stuart, today the Parliamentary Under Secretary of State, Minister for Local Growth and the Northern Powerhouse Jake Berry MP visited Withernsea.