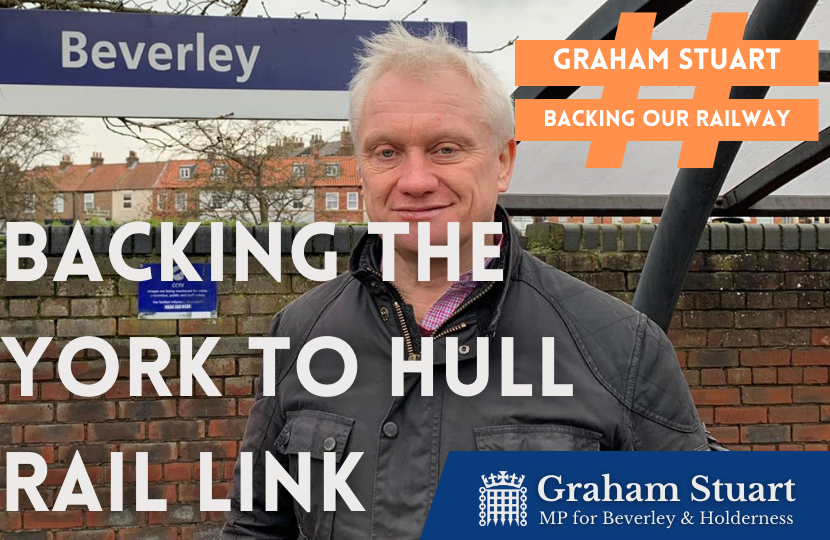 Hull and Beverley are linked with Market Weighton, Pocklington, Stamford Bridge and York by the increasingly congested A1079. The Minsters Rail Campaign believes that the former 32-mile Beverley to York “Minsters” rail line (closed in 1965), which branched off the existing Hull-Scarborough line at Beverley and served these places, should be reinstated.

The track was closed in 1965 following recommendations in the Beeching Report two years earlier which results in approximately 6000 miles of railway lines being axed on cost and efficiency grounds.

Restoring the railway line between Beverley and York will contribute substantially to the long-term economic and social future of East Riding, improving public transport, reducing car dependency and encouraging sustainable development. Regionally, the line will contribute to the Government’s ‘Northern Powerhouse’ initiative and fulfil its promise to ‘Levelling Up’ the country by improving east-west connectivity between East and North Yorkshire.

Graham will continue to make the case on behalf of the residents of Beverley and Holderness to ensure they get the high-quality transport infrastructure they deserve.

In October 2021 a bid to restore a 40-mile direct rail route between Hull and York was given the green light by Government Ministers to move to the next stage. As a result, the bid received support from officials at the Department for Transport as well as funding for 75% of the cost of creating a business care, up to a maximum of £50,000.

The Strategic Business Case has been submitted to the Department for Transport.

Graham Stuart MP launches a survey to give residents their say on the York to Hull Rail Link.

Graham Stuart MP, an energetic campaigner for the line for many years, has welcomed the completion of the Strategic Outline Business Case for reinstating the York to Hull rail link, known as the Minsters Line, and is asking for residents to let him know what the Minsters Line would mean to them.

Beverley and Holderness MP Graham Stuart has met with Chancellor of the Exchequer Rishi Sunak to discuss the local economy and employment opportunities for his constituents.

Local MP for Beverley and Holderness, and lead sponsor of the bid to restore 32 miles of rail track between Beverley and York, has welcomed the news that the bid is currently being analysed by technical advisers at the Department for Transport (DfT) and Network Rail.

Graham Stuart, MP for Beverley and Holderness, has called for continued political momentum on his latest bid to restore the stretch of track connecting Beverley and York in order to shore up local support for the scheme.

Graham Stuart, MP for Beverley and Holderness and parliamentary sponsor of a bid for funding to help restore the direct rail route from Beverley to York, has said that he remains ‘optimistic’ about the project’s future, despite the proposal being initially turned down by the Government.