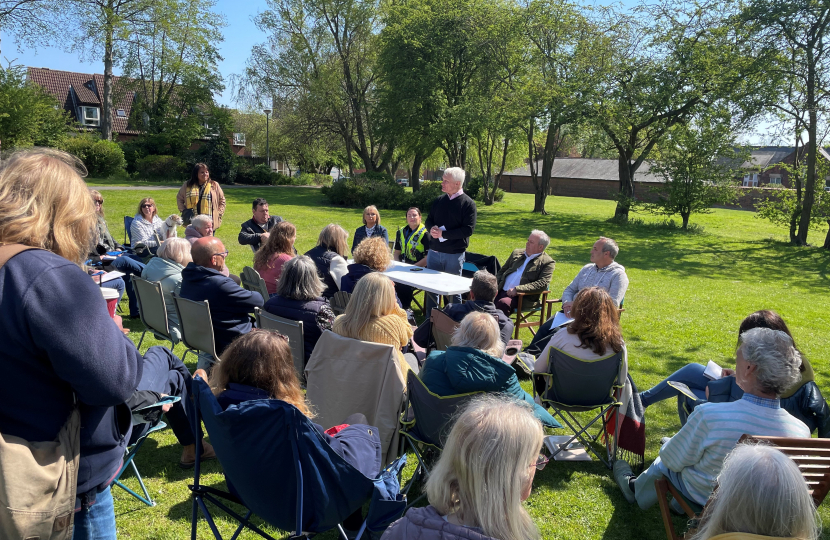 The local MP chaired the public meeting, which was attended by representatives of the local Neighbourhood Watch, ward Councillors Kerri Harold and David Elvidge, Jo Ramsay from the Cherry Tree Centre in Beverley, Sgt Sophie Kemp from Humberside Police, and an officer from the East Riding of Yorkshire Council.

The meeting took place on St Nicholas Green in Beverley, which has been a focal point of anti-social behaviour in recent months.   Residents were able to raise their concerns at the levels of policing, and the lack of facilities for young people in the community.

Following the meeting, a list of actions for the Council and Police were agreed, including investigation of CCTV capabilities in the area, increased engagement by both the Police and the Council with those partaking in anti-social behaviour, and investigation of potential venues for a new youth club. A follow-up meeting will take place in June.

Ward Councillor Kerri Harold said, “I am grateful to Graham for chairing this meeting. It was great to have an opportunity to discuss this important issue with agencies which can make a difference, and to set out a clear plan on the next steps”.

Belen Rebollo, one of the Neighbourhood Watch Co-Ordinators, said, “The members of the Grovehill-Cherry Tree-St Nicks-Priory Neighbourhood Watch Group found the meeting very constructive and a great opportunity for them, Humberside police, ERYC and other agencies to work together to ensure a welcoming, safe and prosperous community that is a gateway to our vibrant Flemingate commercial area and our rich historic centre in Beverley."