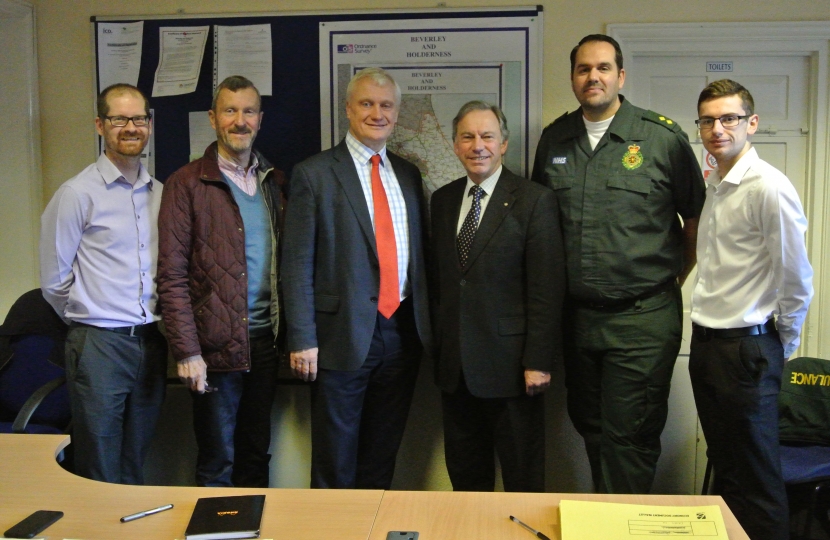 The CADEY committee, chaired by Beverley and Holderness MP Graham Stuart, has met virtually for an update on its campaign to increase the number of lifesaving defibrillators across the constituency.

Formed in 2018, CADEY – standing for Community Access Defibrillators East Yorkshire – identified 63 communities without a publicly accessible defibrillator when it was formed. This has since been reduced by more than half by offering match-funding schemes with parish councils, as well as by asking businesses to use community funds to help purchase them.

The committee’s latest meeting on 20th November brought Graham together with representatives from the Yorkshire Ambulance Service (YAS) as well as health and welfare charities the HEY Smile Foundation, Help for Health and NURSE.

With the help of 50% match-funding from NURSE, six new defibrillators are due to be installed in the coming weeks and months, including in South Dalton and Mappleton, while publicly accessible defibrillators in Kilnsea and Rise have now been added to the YAS database so they are able to direct patients to them in an emergency.

Graham said, “So many cardiac arrests happen outside of hospitals – 30,000 a year – and only one in every ten people survive. There’s no magic bullet of course, but raising awareness of the importance of CPR and defibrillators can make a massive difference because every minute without treatment reduces someone’s chances of survival by 10%.

“I’m delighted as well that we’ve seen CPR training added to the national curriculum, because some other countries which teach it regularly have almost twice the survival rates.

“Knowing where your nearest defibrillator is and being confident to use it are two simple steps that can save lives.”

Leading charities have raised concerns that survival rates could be getting worse after one-third of British adults said that they didn’t know whether they should be giving CPR during the pandemic, or if it has to be performed by trained clinicians in suitable PPE. Official guidance from the Resuscitation Council recommends placing loose material over the patient’s mouth and nose before performing hands-only CPR.

The CADEY committee is also working up plans to send postcards across Beverley and Holderness, with information about what to do in case of emergency alongside the location of the closest available defibrillator. The committee will be encouraging people to stick these on their fridge, so the information is close to hand in an emergency.

The postcards will also invite people to download the free what3words app, which has given every 3-metre square in the world a unique combination of words. Their system is already used by YAS to quickly identify where to go on call-outs and giving YAS the three words corresponding to your exact location can save paramedics vital minutes to help in the fight to save lives.

The postcards will feature space for people to write in the what3words corresponding to their home address, so that YAS know exactly where to head to and can tell the caller where their closest defibrillator is.

Graham wants to see publicly-accessible defibrillators in every community in Beverley and Holderness, with as many people as possible trained in how to use one and everybody knowing where they are.