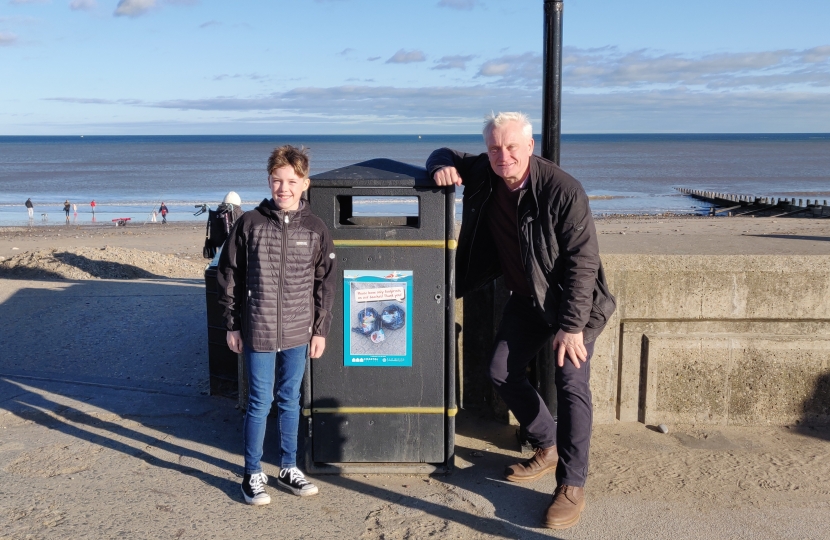 Graham Stuart, MP for Beverley and Holderness, recently met Jay Norris, Hornsea boy, who he nominated for the Kids Count Inspiration Awards for his outstanding dedication and commitment to keeping his local beach clean.

The aim of the Kids Count Inspiration Awards is to recognise those individuals and organisations that have inspired young people in their communities. These are special awards that give MPs the opportunity to highlight outstanding work in their constituency and to demonstrate their commitment and support.

Jay has been litter picking on Hornsea beach in his spare time for the past 5 years and over this period he has prevented huge amounts of litter from going into the sea. He is well known in his local area for his persistent work that benefits the community and protects marine wildlife. With the help of East Riding of Yorkshire Council, he has created posters which have been put up along Hornsea promenade to demonstrate the sad reality of the litter that is being left. Jay has also featured on BBC Radio Humberside, where he highlighted the vast quantity of litter that he collects.

On a number of occasions, Jay has also combined litter picking with fund raising a significant amount of money for Hornsea Inshore Rescue and his karate club.

Graham said, “It was fantastic to meet Jay at Hornsea beach, where he litter picks, to hear more about the brilliant work he has been doing to protect the marine wildlife. He showed me his photo album of the huge amounts of litter he has collected. It was incredible to see how dedicated and passionate he is about this issue at such a young age and how he is trying to encourage others to do the same. I eagerly await the outcome of the awards and I hope that Jay receives the recognition he deserves”.

Jay said “It was great to meet Graham and show him, through my album, the amount of rubbish I have collected. He was really keen to hear about what I had been up to which was really nice, and he seemed very interested in how change can be achieved.

“Hopefully the more people who realise that the litter they drop has to be picked up by someone else and that dropping litter has a much bigger impact, then a difference can be made across the UK. There is a long way to go but not dropping litter is a great place to start”.

Beverley and Holderness MP, Graham Stuart, has paid a visit to a local success story at Paull Boatyard to see some of its seafaring projects in action.