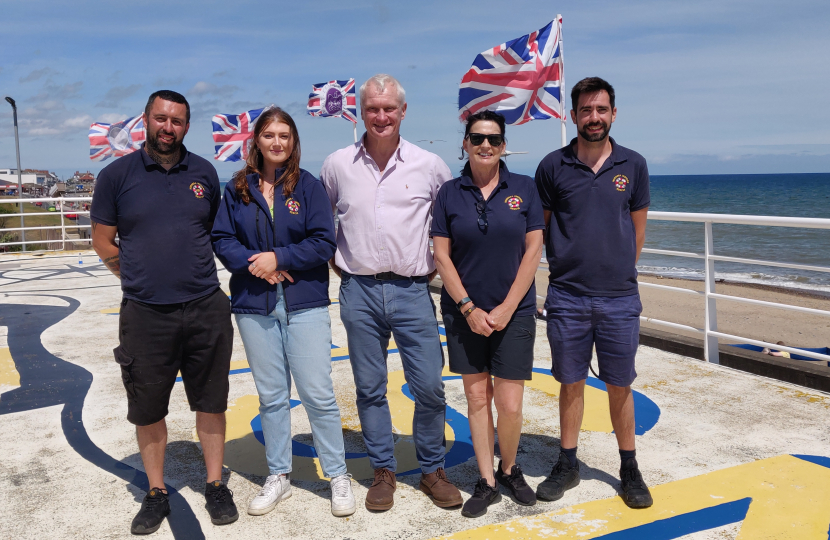 Graham Stuart, MP for Beverley and Holderness, recently met representatives from Hornsea Inshore Rescue to see first-hand the important work they do in the local community.

Hornsea Inshore Rescue is an independent local charity based in Hornsea which has been doing vital work saving the lives of people along a section of the East Yorkshire Coast since 1994. Its team is formed entirely of volunteers and its work is funded by the generosity of local businesses and members of the public.

Previously Graham supported the charity to get help from East Riding Council to level the beach when launching boats was difficult due to the shifting sandbanks, and he saw the result of this during his visit. While he was there, he also spoke to some of the volunteers and thanked them for the important work they do by providing a life saving inshore rescue service and education to all on staying safe while they are out at sea.

After Graham’s visit, Sue Hickson-Marsay, who is the Hornsea Boat Launch Manager, said: “It was great to host Graham at our Hornsea Rescue Lifeboat Station. Our committed team of volunteers enjoyed telling him about the work they do to keep local people safe, and it was exciting to show him the ideas we have to expand our facilities.”

Following his visit Graham said: “It was wonderful to meet the dedicated volunteers at Hornsea Inshore Lifeboat Station. I enjoyed learning more about the important work they do to protect residents while at sea and seeing their plans for the future of the charity.”

If you would like to read more about the important work of Hornsea Inshore Rescue you can do so by visiting their website: https://hornsearescue.org.uk/