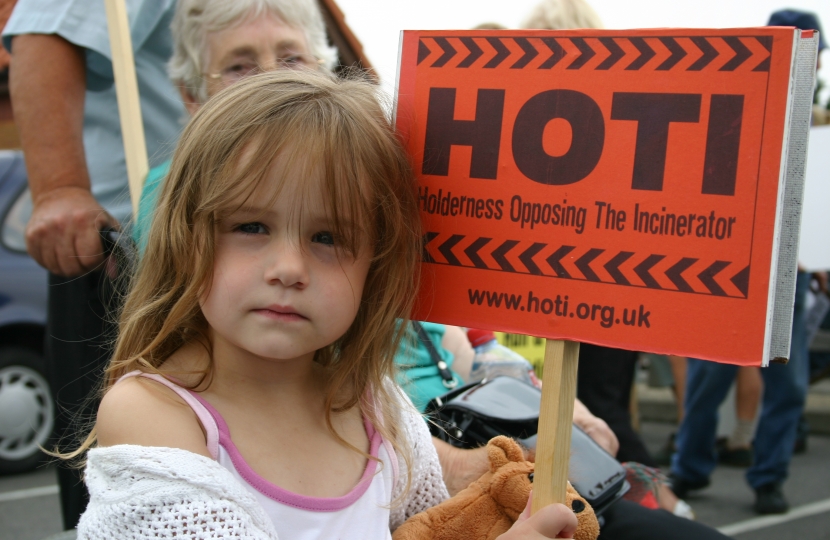 Graham Stuart MP, who founded the Hull and Holderness Opposing the Incinerator (HOTI) pressure group, today said he was cautiously optimistic following news that plans for a giant waste burning plant were to be revisited.

The MP for Beverley and Holderness, who has campaigned with councillors and members of the public to stop the incinerator being built at Saltend, said: “With luck this could spell the end of the project and the start of something new.”

HOTI has always been opposed to the planned 240,000 tonne a year plant, but news that councillors from both Hull and the East Riding are to be briefed on possible down sizing of the plans next week has been welcomed.

Graham said: “The original incinerator was to be huge, old fashioned and inefficient. Most of the energy it was to produce would simply have been vented up the chimney. Local people did not want it and we have argued consistently for a greener, cleaner, more sustainable approach to dealing with our waste. I hope there is to be a rethink and that the Councils will ask the contractor to come forward with different plans which are acceptable to people in the area and which improve rather than degrade the environment.”

“All we can do for now is give this news a cautious welcome and hope common sense prevails.”

He added that he would be contacting councillors in the East Riding to be kept briefed on possible changes to the incinerator plan.

It is understood spiralling costs and a fall of in the amount of waste being collected from homes which cannot be re-cycled meant the current plan needed to be re-visited.

Waste Recycling Group (WRG) is contracted to manage the region's household rubbish by the two councils.

Cllr Peter Turner, Chairman of HOTI said: "We don't regard this as a triumph. We have won the battle but not the war."