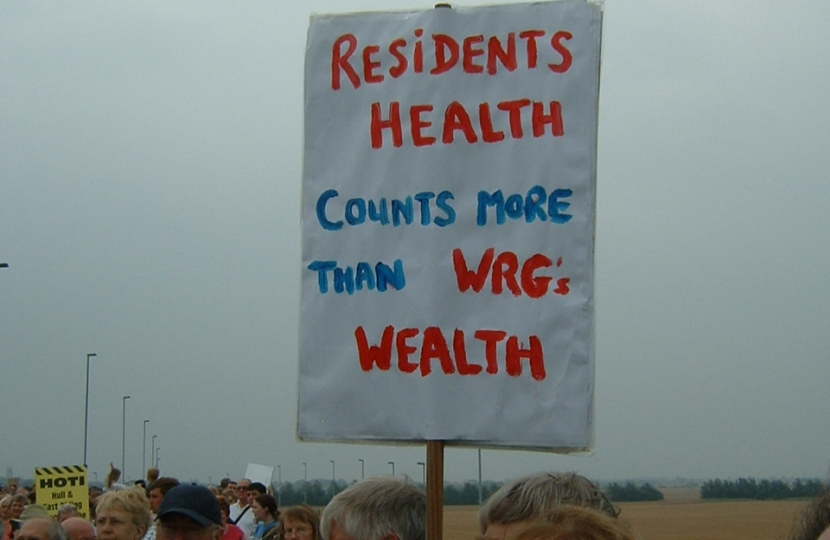 Graham Stuart, MP for Beverley and Holderness, and founder of Hull and Holderness Opposing the Incinerator (HOTI) today warned campaigners not to rest on their laurels after the plan was scrapped.

While Graham hailed the news the incinerator was not being built as a ‘brilliant’ victory for passionate people working together, he said it was now important residents across the East Riding and Hull continued to improve recycling rates.

Graham said: “From the moment I founded Hull and Holderness Opposing the Incinerator (HOTI) I knew we were in for a long battle, but Wednesday’s  announcement by the East Riding and Hull City councils has proved it is always worth fighting for what you believe in.

“The termination of the contract with Waste Recycling Group (WRG) means the people of Hedon, and the surrounding communities, can quite literally breathe a sigh of fresh air in relief.”

And he added: “While I have worked hard to make sure the incinerator was never allowed to go ahead, congratulations must go to all those who have also fought so hard against it.

“Credit must go to Cllr Peter Turner, John Dennis, Malcolm Lynn and Mike Bryan along with everyone in the community who attended meetings and marched with me in protest at the incinerator plan.

“I started the HOTI campaign in 2006 and it has been a brilliant example of cross party working with no artificial political divides – everyone was working towards the same goal and today that goal has been achieved.”

But he said: “Recycling rates have been improving over the past few years and that is great, but we must all keep going and try and make sure we reduce the need for projects like this incinerator.”

The current services will be provided until the end of March 2013 to enable residents to continue to improve on their excellent recycling and composting achievements.

An energy-from-waste facility will not be built within this contract.  The councils will put in place new contractual arrangements for the treatment and disposal of waste.

A spokesman for the councils said: “This is a good outcome for all concerned. We are moving forward with the management of our waste.”

Graham said: “The incinerator was to have been huge, old fashioned and inefficient. Most of the energy it was to produce would simply have been vented up the chimney. Local people did not want it and we have argued consistently for a greener, cleaner, more sustainable approach to dealing with our waste.”