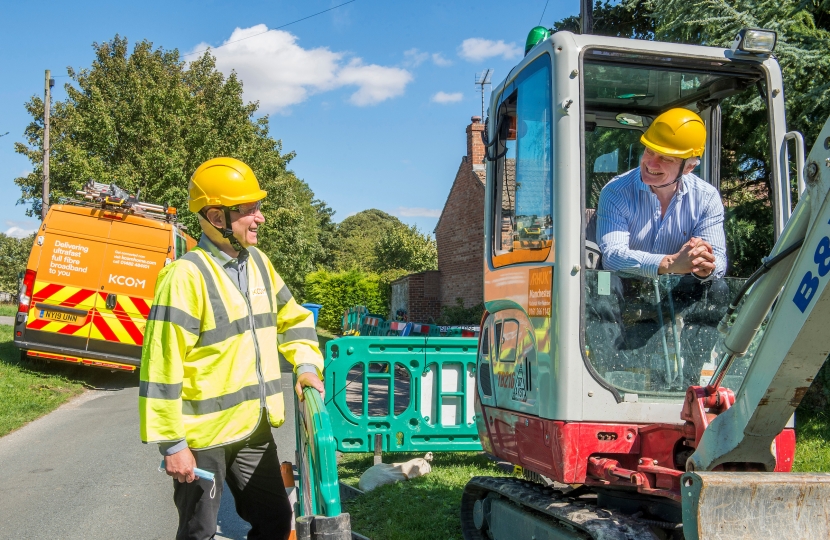 Telecoms firm Openreach, the offshoot of BT working to install fibre broadband across the UK, have announced that thousands more premises in Beverley and Holderness are set to benefit from being connected to new, ultrafast full-fibre broadband, capable of delivering speeds upwards of ten times faster than before.

2,895 premises in Beverley and Holderness are to be included in Openreach’s expansion, which will deliver full-fibre broadband to at least 3 million more homes and businesses in some of the UK’s hardest-to-reach rural communities. All in all, Openreach will be connecting 25 million properties by an earlier deadline of December 2026, helping to meet the Government’s commitment to deliver gigabit-capable broadband to 85% of the UK by 2025.

The news has been welcomed by Beverley and Holderness MP Graham Stuart, who has been campaigning for his constituents to benefit from better internet connection, and encouraging residents suffering from poor broadband to contact his office in order to encourage new builds from Openreach and KCOM.

The local MP said, “Delivering better broadband is all the more crucial for people and businesses in my constituency as we recover from the effects of the pandemic.

“Covid restrictions have also shown us that we can benefit from better remote access to work and education, and research shows that Openreach’s national rollout could allow more than 1 million more people to access or return to employment, particularly older workers or those with caring responsibilities.

“It could also boost the UK economy by up to £59 billion, with particular benefits for rural communities like ours, and could cut carbon emissions as fewer people travel for meetings.”

Alongside the expanded rollout’s benefits for consumers, Openreach have announced that it will create a total of 7,000 new jobs across the supply chain, with recruitment for the first 1,000 of these roles already beginning. Since 2017, 9,000 apprenticeship jobs have been created by Openreach’s national rollout.

Graham added, “I want my constituency to benefit from better broadband sooner rather than later, which is why I’m encouraging residents interested in improving their internet speeds to get in touch with me directly, so I can see if anything can be done.”

Graham has campaigned hard to get funding to improve broadband in East Riding. He has highlighted the desperate need for broadband provision to support rural businesses.