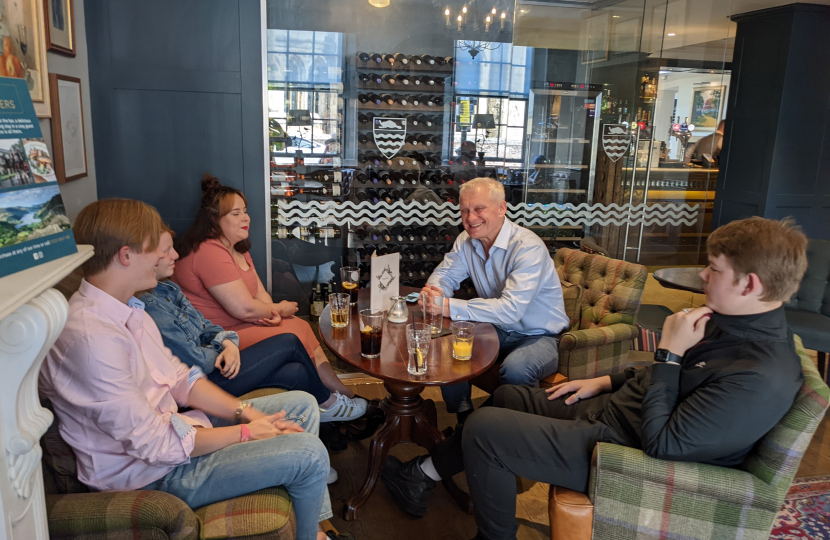 Graham Stuart, MP for Beverley and Holderness, met some of the East Riding Members of the UK Youth Parliament on being successfully elected, as well as the East Riding representative on the Regional Steering Group.

The UK Youth Parliament was founded by Andrew Rowe when he was the Conservative MP for Faversham and Mid-Kent. He believed passionately that the young people of the UK should be given a voice on the issues that matter to them, and it was his commitment to this that led to the creation of the first UK Youth Parliament in 1998. His tireless work means that students aged 11-18 have an opportunity to campaign for social change in a range of important issues, including public transport and education.

In the 2022 UK Youth Parliament Elections, Freya Edwards and Aonpreeya Petchatchua were elected as Members of the Youth Parliament for the region and Tegan Broomhead and Thomas Edmiston were elected as Deputy Members. Their key campaign priorities include better support for children with behaviour issues, to work with youth groups to help tackle substance abuse and mental health issues, to help causes relating to Women’s rights and improving prospects for young people living in the North of England.  Matthew Fisher-Gill is the nominated representative for East Riding on the Regional Steering Group.

During their meeting Graham congratulated the recently elected Members and Deputy Members on their success and learned more about the difference they hoped to make in East Riding. In turn, the students also asked Graham about his experience working in politics and his new role as Minister for Europe.

After meeting Graham, Tom Edmiston, Deputy Member of Youth Parliament commented: “Meeting Graham was a thoroughly pleasant experience, with him being extremely informative on matters both locally and nationally and really enhancing our understanding of the political world. Graham was very honest and comprehensive in his answers to our questions.”

Following his discussion with the Members, Deputy Members and Regional Steering Group Representative, Graham said: “It was wonderful to meet the recently elected members of the UK Youth Parliament. They have great ideas for how to make East Riding a better place and I am sure they all have a bright future ahead of them in politics.”