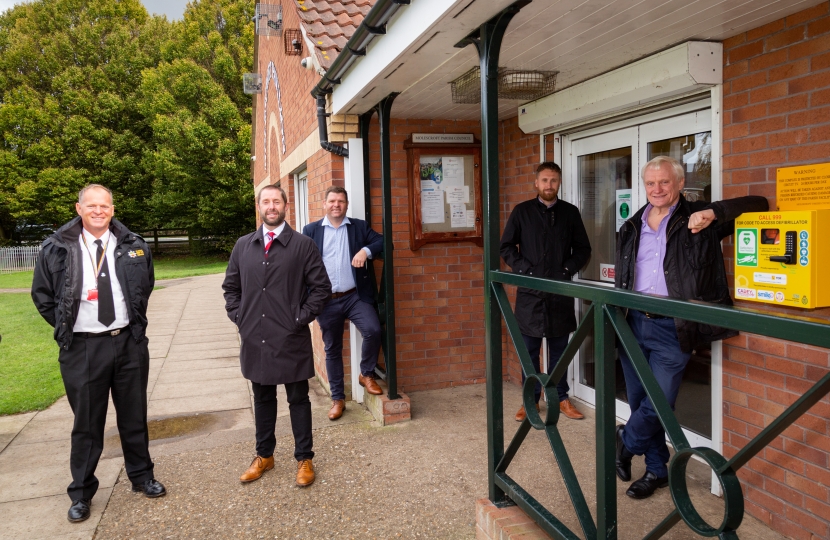 Founder of the CADEY campaign and MP for Beverley and Holderness, Graham Stuart, visited the newest addition to the list of publicly accessible defibrillators in his constituency.

The new, lifesaving device has been installed at Molescroft Pavilion for use by local residents in the event of someone suffering a cardiac arrest. It has been donated by construction group Esh Civils as part of YOR4Good – a community fund which contributes to local initiatives as part of their ongoing construction projects.

Esh currently have two projects in the East Riding – the Cottingham & Orchard Park Flood Alleviation Scheme and the Gypsey Race Park scheme, near Bridlington. They have agreed to partner with the CADEY campaign, so that three more defibrillators will shortly be installed in Mappleton, Thearne and South Dalton, in addition to the Molescroft location.

CADEY – Community Access Defibrillators for East Yorkshire – was founded by Graham in 2018 and aims to increase the coverage of publicly accessible defibrillators in Beverley and Holderness by working with partners including the Smile Foundation, Help for Health, Humber Aid and the Yorkshire Ambulance Service.

It also seeks to improve public awareness of how important defibrillators are, and how easy they are to use. The Yorkshire Ambulance Service have recently made their familiarisation service free of charge, while schools can sign up for free resources from the British Heart Foundation.

Commenting on the good news, Graham said: “Esh have really understood the importance of having publicly accessible defibrillators in every community, and I’m delighted they’ve chosen to come on board with my CADEY campaign.

“Molescroft Pavilion is a great place for the new defibrillator; it’s incredibly well-placed to save lives.

“I was shocked when I found out that most people who are taken to hospital following a cardiac arrest still die, simply because treatment wasn’t started quickly enough. Someone’s chance of survival drops by 10% for every minute that defibrillation is delayed.

“So I’d like to thank Esh Civils for helping to ensure that a defibrillator is close by in case the worst ever happens, so that people can call 999 and then retrieve the defib for immediate help.”

Graham wants to see publicly-accessible defibrillators in every community in Beverley and Holderness, with as many people as possible trained in how to use one and everybody knowing where they are.