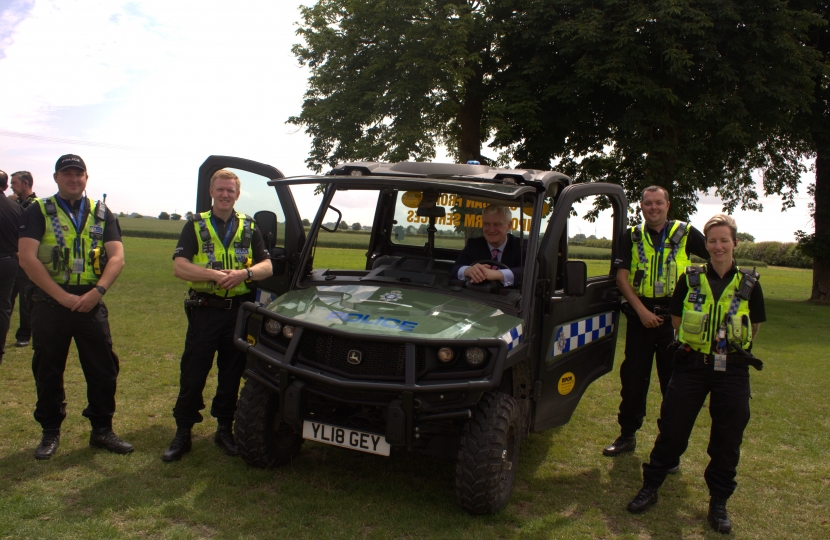 (Graham with the members of the Rural Task Force)

Beverley and Holderness MP Graham Stuart recently met Holderness Farm Watch members along with Humberside Police’s newly formed Rural Task Force at Lelley Barns to congratulate them on the progress they have both made in tackling rural crime. This event was the first time that members of the rural community group were able to share their concerns with the unit in person since its formation in February.

Based out of Driffield Police Station, the task force is led by Inspector Jon Powell and works proactively to disrupt rural crimes like poaching, equipment theft and hare coursing. The dedicated unit also allows for better information sharing between police forces, helping contribute to Operation Galileo, a formal partnership of 20 forces covering areas of the country most affected by hare coursing.

As well as using the latest drone technology by partnering with Humberside Fire & Rescue, the Rural Task Force has also been equipped with a Marked Gator vehicle named ‘The Investigator’, on loan from Ripon Farm Services, as well as a new Isuzu Pick Up from Maple Garage in Hull to help pursue those suspected of committing rural offences across off-road terrain. The Rural Task Force is the first unit in the region to achieve prosecution with aerial footage from a drone.

In March 2018, Graham launched the Country, Land & Business Association’s (CLA) national campaign against hare coursing with Libby Bateman and Holderness Farm Watch’s Hollie Harris. The focus of this campaign was the human costs of hare coursing, as farmers and their families have often felt intimidated by trespassers in the most isolated parts of the countryside.

Earlier this year, Graham helped the CLA secure a meeting with Zac Goldsmith, who had been appointed Animal Welfare Minister and is leading on the Government’s Animal Welfare Action Plan, which helped to convince the Minister of the need for legislative change to better target those taking part in hare coursing.

The Government has subsequently announced that it is considering increasing the maximum penalty for illegal coursing to an unlimited fine and a prison sentence of up to six months for these offences. These amendments will also give police the power to claim against the costs of kennelling seized dogs and will allow them to target persons suspected of ‘going equipped’ for hare coursing activities.

Libby Bateman commented, "It’s great that Graham was able to attend today and see first-hand the progress we have made on behalf of residents most affected by hare coursing. His support is much appreciated, particularly in getting people to the negotiating table and for nudging the relevant people in our direction. We're finally starting to be listened to, however there's still a way to go before measures to better tackle hare coursing are put down in legislation."

PC Richard Fussey, an officer in the Rural Task Force, commented: “Humberside Police take the issue of hare coursing very seriously and with ‘Operation Galileo’ (an operation set up to specifically target offences relating to hare coursing) we continue to have dedicated patrols across the East Riding on a weekly basis throughout the hare coursing season.

“These patrols act as both a deterrent to the offenders and to enable us to locate those responsible and utilise all powers available to deal with them.”

Charlie Leake, Chairman of the Holderness Farm Watch, added: “It's great to have the support of our local MP when it comes to pressing Humberside Police to deliver for the needs of farmers and residents in our most isolated communities throughout the East Riding. It's good to see our concerns are being taken seriously and dealt with by a dedicated unit."

Inspector Jon Powell commented, “Humberside Police are aware of the concerns of the communities and farming communities of the East Riding. I understand how rurally they may not have felt engaged with the police, and that police were not as present rurally as we maybe should have been.

“Over recent years Humberside Police has reinvested in the East Riding area with stronger neighbourhood teams and patrol teams being based back locally in and around the East Riding.

“We are dedicated to bringing reassurance and confidence to our smaller towns, villages and farming communities. I believe the new Rural Task Force shows the intentions of Humberside Police to tackle rural, wildlife and heritage crime in our most rural areas.

“I would ask for members of the public to remain vigilant at all times and be confident to report any suspicious behaviour or crimes to us.

“Helping us to help you can make all of our communities stronger and safer. We work better when we work together.”

Graham added, “I am pleased to see that after years of campaigning, residents here in Holderness are finally being given the security and support that they need in their fight against the scourge of hare coursing, which particularly rife in this flat, arable part of the country.”

“I want to thank the newly formed Rural Task Force for meeting with Holderness Farm Watch to discuss rural crime and how best the community can co-operate with the unit to prevent illegal activities and achieve convictions.”